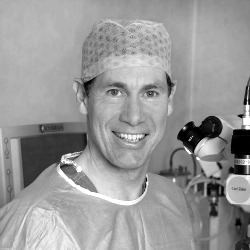 0
Years in practice
Book an appointment

Keith Bates graduated from Oxford University with a Bachelor of Medicine and Surgery. He followed this with a research fellowship in Oxford studying the corneal endothelium. He then undertook post-graduate ophthalmic training at the specialist units of University Hospital Nottingham, Oxford Eye Hospital and Moorfields Eye Hospital, London. While there, he learned from many of the top corneal surgeons in the country. He has continued to research and work on the cornea throughout his professional career.

Keith is now a Consultant Ophthalmic Surgeon with the Taunton & Somerset NHS Trust, a position he has held since 1992. In this position, he performs high volume cataract surgery and corneal transplantation surgery. A regional corneal expert, he treats patients from across the South West at his weekly corneal clinic.

An accomplished cataract and refractive surgeon, he has been performing laser vision correction since its introduction to this country in 1990. He organised the first excimer laser clinical trial at Moorfields Eye Hospital. After further training, he became an accredited VISX laser user in 1993. He has performed surface based treatments, and has been performing LASIK since its start.

As refractive technology continues to develop, so do the requirements for training. In 2002, Keith received VISX accreditation at Moorfields for Wavefront treatments and accreditation for Z-LASIK in 2008. Now with over 15 years experience in laser treatments, he manages a successful independent Laser Eye Surgery practice besides his NHS work.

Keith has been active throughout his career presenting on corneal and refractive surgery at national and international scientific meetings. He has published much of his work in the major peer-reviewed journals, and he is also a reviewer of corneal papers for several leading journals.

The best way to figure out your eye treatment options is to give us a call on: 0800 368 9277 and we can help answer any questions you have

Give us a call

If you’re seeking private eye treatment in Southampton or Taunton, contact us to schedule a consultation with Mr Keith Bates by calling 0800 368 9277 or contact us via this email form.