What is LASIK? So LASIK is the most commonly performed laser eye surgery procedure in the world. It is a very well established, very safe, and very effective way of correcting vision so that patients no longer need to wear glasses. The procedure itself takes approximately four to five minutes in total to perform on
each eye.

The Two Steps to the LASIK procedure.

There are two main steps to the LASIK procedure. The first is using what’s called a femtosecond laser to create a very thin flap on the surface of the eye in what we call the cornea.

Once the excimer laser has done the appropriate amount of sculpting, we place the thin flap that we created back on the surface of the eye and give a gentle wash to ensure there’s no particles in between the deeper layer and the flap. And then that’s the treatment completed, taking four to five minutes, and the vision is instantly corrected.

What a patient can expect after surgery.

In terms of what the patient notices, initially they’ll notice the vision is in focus but it’s quite misty and steamy, and over the subsequent 24 hours, the steaminess, the fogginess disappears and the patient has, immediately, sharp vision. 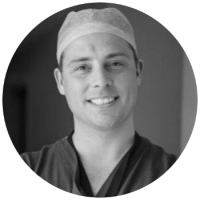 Alex J Shortt is a Consultant Ophthalmic Surgeon at Grange Eye Consultants. With many years of experience and expertise in Corneal surgery, Cataract surgery, and Refractive surgery, he is providing his patients with a wide range of treatment options. As he has worked as a consultant and trainer in advanced technologies for correcting vision for over 14 years, he has a broad knowledge of various eye conditions and can, therefore, find the best suitable solution for every individual client. Apart from working as an Ophthalmic Surgeon, Dr. Shortt is also involved as an editorial board member of the Cochrane Collaboration’s Eyes and Vision Group and expert advisor to the European Medicines Agency.