Skip to content
Previous Next
Like Millions, Julie’s sight began to fail when she hit 40. Now it’s perfect again thanks to a new plastic implant

Like Millions, Julie’s sight began to fail when she hit 40. Now it’s perfect again thanks to a new plastic implant 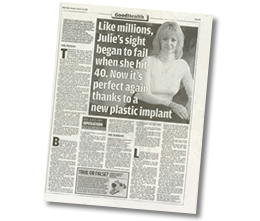 ts those aged 40 and over. Until recently it’s been impossible to cure it, and most people had to use reading glasses.

But now, lens implants remove the need for spectacles. Last year Julie Young became of the first to have these revolutionary lenses. Julie, 47, who runs a beauty business and lives in Dorset with her husband Marc and daughter Camilla, 21, tells KATE MAXWELL her story, while her specialist explains the procedure.

Turning 40 was a double whammy. Not only was it a milestone in terms of age, my eyesight also began to go. I’d always had 20/20 vision, but suddenly things weren’t as sharp as before and I would have to hold a book at arm’s length to focus on it.

It was a real problem at work. I run a beauty salon where I do nail extensions and apply semi-permanent make-up, so I need to see clearly or my clients won’t get the look they’re after.

The optician said I had presbyopia and needed reading glasses. At first, they made a difference, but over the next five years, my sight began to deteriorate seriously.

I had to keep going back for check-ups every year and had the prescription changed every couple of years. It all became rather expensive as I’d usually leave having ordered another pair of specs which had taken my fancy.

I must have ended up with about six pairs, including one I kept at work and another I kept in my handbag, plus a couple of prescription sunglasses.

Wearing reading glasses was also fiddly and debilitating. I found that if I wore them while walking it made me dizzy because they are meant for near vision.

So I’d perch them on the top of my head until I needed to see something close up – but they’d keep falling off if I bent over.

Then last year I realised it wasn’t just close-up things I couldn’t see – the middle distance was also becoming blurry. Things were actually clearer if I looked through my reading glasses, which I found very scary.

One of my clients told me she’d had a new procedure to correct her presbyopia. It was called refractive lens surgery, in which artificial lenses were put in her eyes to replace the natural lenses.

I winced when she told me how the surgeon had cut her eyes open, but she was so pleased with the results that I took down the details.

I went to see Robert Morris, the eye surgeon, in April, and he clinched it for me when he said that without surgery, within five years I’d need varifocal glasses to see anything, near or far.

Before the operation, I was given eye drops to dilate my pupils and a light sedative was injected into my hand.

I could just have had anaesthetic drops, but I didn’t want to be fully conscious when the surgeon was rummaging around.

I could have gone for a full anaesthetic, but I thought being knocked out cold was a bit over the top for such a quick operation.

Mr Morris put a wire instrument on my right eye to stop me from blinking and I was told to look at the light of a microscope.

I was a little anxious, but I don’t remember anything after the injection. Although I was conscious, the sedative acted like an amnesia drug. I woke up feeling fine, had a sandwich and cup of tea and went home.

My eye wasn’t sore at all. I was told not to do anything too strenuous for a week and had to put in antibiotic drops every day.

I was aware immediately that the vision had improved in my right eye, even thought it was a bit blurry at first.

It was weird not being able to see properly out of the other eye – I still had to wear my glasses to work until it was operated on a week later.

When I went back to the surgery, Mr Morris gave me a book and asked if I could read it with my right eye.

When I said it was blurry, he told me to hold it a bit closer – my instinct was to hold it further away because that’s what I’d been doing for the past five years. I did as he said and, suddenly, the words came into focus.

For the second operation, I was more relaxed and the results were instant – it was truly amazing. As soon as I woke up from the anaesthetic, my vision was sharp. I could even read the serial number of my iPod, which I hadn’t been able to do before.

I was able to go back to work the next day. For a short while, things felt slightly tender around my eyeballs whenever I removed my make-up, but they didn’t hurt.

It’s wonderful not having to remember to take reading glasses with me wherever I go. It was well worth £4,550. If I live for another 30 years, I would have spent that much on specs anyway, and I’d far rather be without them.

Robert Morris is consultant ophthalmic surgeon at Southampton General Hospital and founder of Grange Eye Consultants, based at Wessex Nuffield Hospital. He says:

The eye is designed to adjust so that it can focus near and far, like a pair of binoculars.

It’s the lenses that make this possible. In youthful eyes, the cilliary muscle contracts to change the shape of the lens, allowing it to focus at close range.

But as we age, our lenses become harder, thicker and less flexible, making it increasingly difficult for the muscle to adjust its shape, so the eye loses the ability to focus on near objects.

The eye is naturally set to focus at distance, so in the early stages of presbyopia, only near vision is affected.

However, as eyes deteriorate, the mid-range and distance vision also get worse.

As a result, over the age of about 45, we are often less able to see near objects clearly and so need reading glasses.

Presbyopia is not the same as long-sightedness, which some people are born with, where the eyeball is ‘shorter’ than it should be or the cornea is too flat, so that light coming into the eye focuses at a point behind the retina.

Laser surgery is not an option for presbyopia because it is the lens that is the problem, and lasers simply cannot make it more flexible.

The new technique we use to treat presbyopia is similar to that already used for treating cataracts.

But while a conventional cataract lens is moulded into five ‘zones’ or ridges, with each zone a different power so it can focus on a different distance (like varifocal glasses), the ReSTOR lens has many more ridges, giving it a much wider range of distance.

Julie’s poor vision was really beginning to affect her work and she could read only the top two or three lines of an optician’s chart.

I have treated about 200 patients like her for presbyopia, and she was very enthusiastic, even after I’d explained that risks – 20 percent of patients still need to wear glasses afterwards.

I measured the length and curvature of Julie’s eyes to calculate the power of lens I would require – she needed similar lenses in both eyes. We always operate on one eye first and then leave it to recover for a week before operating on the second.

In Julie’s case, we started with the right eye. I made a minute 2.6mm incision at the top of the eyeball, just below the lid, and inserted a tiny ultrasound wave-emitting probe.

This went through her cornea and pupil, to the lens which I was going to replace.

The lens is like a plum, and you need to cut through the skin and remove the ‘flesh’ and ‘stone’inside.

We do this by using ultrasound waves to emulsify the lens so that it turns from a hard jelly to a murky fluid that can be sucked out using the same probe.

Then I injected the new ReSTOR lens – which is made of acrylic and folded up tightly – through the incision with a device like a peashooter.

The great thing about these acrylic lenses is that they will last a lifetime – they won’t age and change like natural lenses do, and there is no chance of a patient developing cataracts.

The incision is so small it seals itself without stitches and the lens unfolds by itself. The whole procedure lasts only 20 minutes.

Julie then had a cup of tea and a snack in the recovery room and was able to go home. The eye takes a couple of days to adjust to the new lens, during which time the vision will be blurry.

The operation went very well, and a week later Julie came back to have her other eye done. She is now set for life and should not need glasses again.