Skip to content
Previous Next
It’s All in the Eyes

It’s All in the Eyes 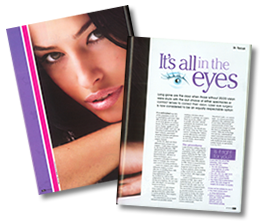 Long gone are the days when those without 20/20 vision were stuck with the dull choice of either spectacles or contact lens to correct their vision. Laser eye surgery is now considered to be an equally respectable option.

It is estimated that 30% of the population in the UK is shortsighted and more than 68% of people over the age of 16 wear glasses or contact lenses. But these statistics are set to change rapidly as more and more people each year are choosing to permanently bin their contacts, associated cleaning solutions and glasses to have corrective laser surgery instead.

In the UK, there are three different types of laser eye surgery – lasik (laser assisted in situ keratomileusis), PRK (photorefractive keratectomy) and Lasek (laser epithelial keratomileusis. All three of these techniques use a computer-controlled (excimer) laser, to reshape he cornea and correct focusing problems.

Laser eye surgery, also called refractive surgery, is most effective in treating those with short-sightedness, but long-sightedness can also be rectified as well as mild astigmatism. For those with very strong prescriptions, the success rate and degree of correction tends to be lower.

If you have an age-related vision defect, caused by the ageing of the lens rather than a cornea problem, then surgery might not be for you.

It is important to do as much research as possible before making a decision about whether to undergo eye surgery. Read up on the subject, talk to people who have already undergone the treatment, and ask them about their experiences. You should also be aware of the fact that some careers, including the military, can be affected by a decision to undergo refractive surgery. So if in doubt, check before you proceed.

The procedures
Lasik involves cutting a flap in the cornea, then reshaping the underlying cornea with a laser before replacing the flap. Lasik patients tend to experience less discomfort, and obtain good vision faster than PRK patients. In PRK, tissue is removed from the cornea to reshape it. Surgeons tend to opt for PRK in those patients where making a flap would not be suitable, such as those with larger pupils or thin corneas.

Lasek is considered to be a variation of PRK. Also called epithelial lasik or E-Lasik, the surgeon cuts the outer layer of the cornea with a surgical blade. The eye is then covered with an alcohol solution for around 30 seconds to loosen the edges of the epithelium. This is then folded out of the way, in order to allow the laser to shape the cornea underneath.

Wavefront lasik – or custom lasik – is a newer procedure tailored to the individual eye. It uses three-dimensional measurements of how your eye processes images to guide the laser in reshaping the cornea. With this technology, very precise, individualised vision correction outcomes can be achieved that are impossible with traditional lasik surgery, contact lenses or spectacles.

If you can tick all of the following, laser surgery should suit you:

It may not be suitable for you if: